The recipe for the best laptop in the world

In a previous review I reviewed my new laptop after using it for a while. I mentioned my old laptop while writing it and eventually decided to write a review of my old one also. Reviewing a 7-year-old laptop is probably not very helpful to anyone, but I just wanted to bring into daylight my thoughts on what would be the ideal laptop. Manufacturers, take note.

Back then my requirements for the laptop were:

The poor student I was, I ended up buying the Acer 1810T, with a 1.4 GHz single thread Intel Core processor. The laptop had 3 GB of memory, which I changed to 2x1 GB faster ones. I also bought an 8 GB SSD drive for the laptop. Back then SSD drives were really expensive, and that 8 GB one cost me 65 €. Later I changed it to a spare 60 GB SSD drive. The 8 GB version was plenty, though, for the Arch Linux and Fluxbox I used it with. The computer was very fast to use, only YouTube and all the back then numerous sites using Adobe Flash were an issue.

The size is perfect. The keyboard is very responsive and of good size, there's hardly any space wasted.

The touchpad is excellent. It's very small and never on your way, but extremely accurate so you never would need a bigger one. It also features two separate clickable buttons, which provide really nice response.

There is a fan, but at least when using acerhdf kernel module it doesn't spin while idle, so operation is mostly silent.

There's easy access to both the hard drive and memory compartments on the back. Also the battery is easily switchable - I actually used a piece of tape so as not to accidentally remove it. 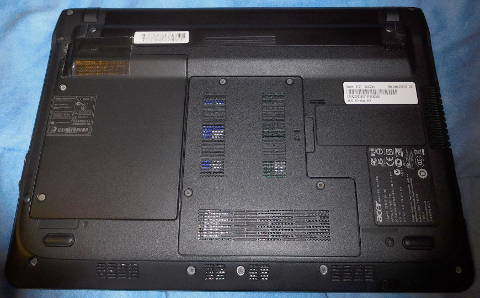 On one side among other connectors there is a combined headphone out / SPDIF interface, a microphone input, an RJ45 ethernet port and a Kensington Security Slot.

Finally, at least when new, the battery does last for quite a long.

The computer could be a bit thinner, especially if manufactured using current technology. There's also very little computing power. The touchpad buttons extend all the way to the edge, making it hard to hold the laptop against your stomach when lying on your back. The display is bad: a cheap TN panel with extremely bad colors and viewing angles. When it was new, the Atheros network interface had some compatibility problems with some Wi-Fi routers.

Compared to my new Asus

The thing I miss the most about the Acer is the excellent touchpad. Also the easily switchable HDD compartment would have helped when the laptop broke down. The side connectors would have been useful at least on a few occasions. Except for the TN panel, the general ergonomics of the Acer were excellent, and every time I'm using my laptop on a train for example, I miss the old one.

Of course there's a six year difference in technology between the computers and my new Asus was more expensive and thus relatively more powerful, so I wouldn't use the Acer anymore, but thanks to modern trends my ideal laptop is still as far as it was back then. That being said, I am still satisfied enough with my Asus so as not to have headaches using it on a daily basis.

It's funny when people talk about Acer, the first thing to come in mind is some kind of cheap piece of plastic which will break apart in a few months. My Acer was the most solid computer I've ever had, with excellent build quality and performance in general. It was always trustworthy with almost zero problems, year after year.

It's a shame that all the good things of the Acer could easily be reproduced, but manufacturers instead opt for extreme style over basic functionality. Here's breaking news to the manufacturers: perhaps to some people, a laptop is mainly a tool and not a lifestyle gadget. Or, no matter how crazy this might sound, perhaps the rational message someone wants to send with a highly functional laptop is actually part of his lifestyle. It might not cater for the masses who are always just drooling for the next iProduct, but a lot of nerds have some money to spend, too.

The same trend goes for almost all electronics. Take for example cell phones. Not counting the self-breaking warrantyless Sonys and the older iPhones, the only ones available today are huge bricks with over 5" displays. It really isn't practical at least for my hands and pockets, and that's why I'm using a cheap Chinese phone even if I had the money to buy an expensive brand flagship model.

I eventually gave my Acer to the Alododo movement. I hope it will have a good end of its life in west Africa.