It's an old trick to play against a pillow or use a mute, but they either offer inadequate damping or a weird embouchure. Basically what I was looking for was a way that

I've heard of people using a large cardboard box filled with pillows, which gave me an idea. How about a bit sturdier box, and a bit more professional acoustic materials? After a few hours of shuffling through hardware store catalogues and stuff I already had, I devised a plan to use my old König & Meyer note stand with a plastic tub filled with polyurethane acoustic absorber foam. 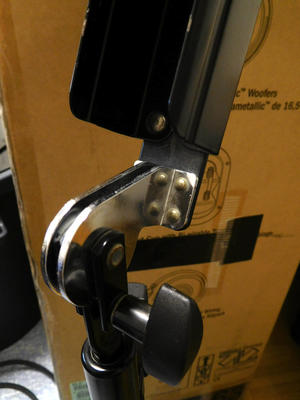 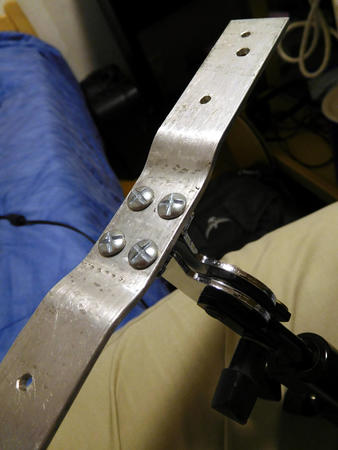 So I had an old K&M note stand, which I rarely use anymore, and if I do, I probably use it to hold an e-book reader. I drilled away the original rivets and designed an adapter piece from scrap aluminium. I then used nuts and bolts to attach the adapter piece to the stand. Pictured is the adapter still as a work in progress. 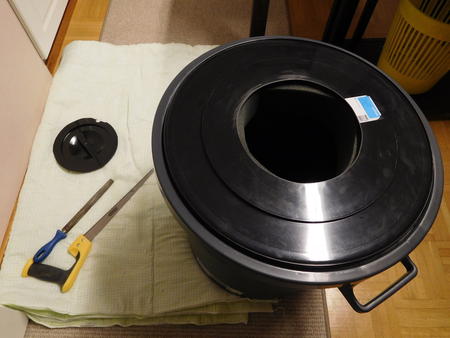 As for the tub I first experimented with a couple of cardboard boxes to get an idea how much space "the sound needs" not to feel weird. I then tried two different plastic tubs: one 65 litres in volume, the other 80 litres, both manufactured by Orthex. I ended up using the 65-litre one, with a lid from a 45-litre tub. The smaller lid was a snug fit for my purposes. I made a hole to the lid using a small saw.

As for the absorber foam I used inexpensive convoluted foam from Thomann - I already had a couple of pieces lying around. I actually use it on my walls also. It turned out I needed exactly 1.5 square meters for the tub. I first cut two pieces so that they'd go around the tub. Then I made a bottom piece. All the scrap foam I tucked underneath the bottom piece. Then I made a narrow strip for the upper part of the tub, placing the convoluted parts against each other. Then I added another layer of foam, and another narrow strip. This filled in the tub pretty nicely and left me with a hole where a trumpet fits in nicely. 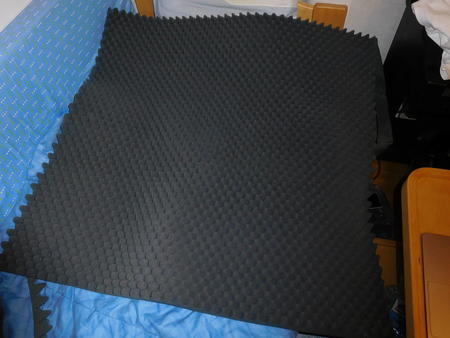 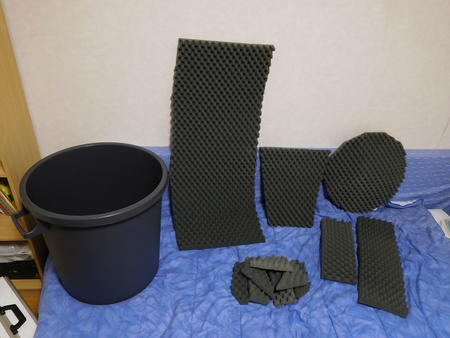 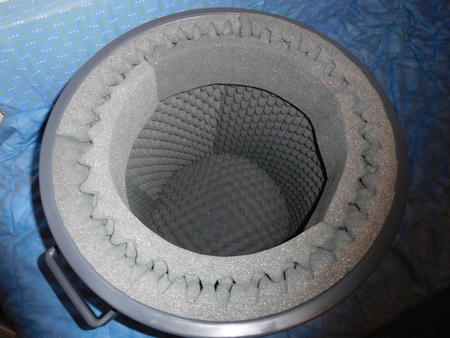 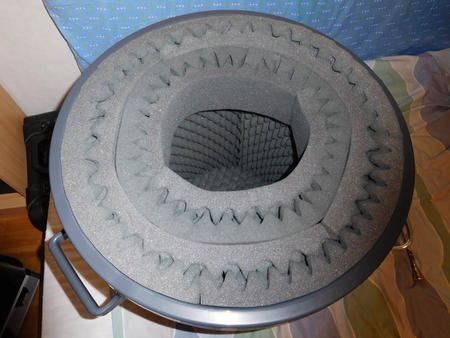 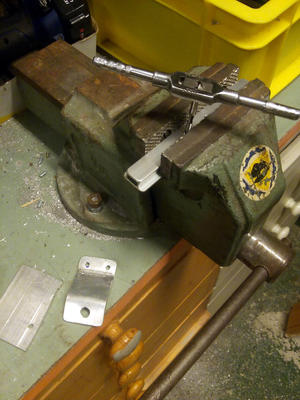 The scrap aluminium I had gave me limits what to work with, so basically I first designed the pieces, then made a rough prototype, and then polished the result. I only had access to simple tools - a hammer, a saw, a file, a table vice, and a cordless drill - so making even small changes to the plans required quite a bit of work. The only special tool I had was a plug tap. Without it the end result would have probably been not so pretty.

The whole thing cost me about 20 € for the tub, 20 € for the foam and 2 € for the nuts and bolts. You will obviously also need the stand and the scrap aluminium, which I already had. Even if the parts were cheap, it probably took me at least a couple dozen of hours to actually make. With better tools and scrap materials it's probably much easier.

The finished product, assessing the effectiveness

After a few iterations of trial and error, I finally got the whole thing together pretty nicely. Here are pictures of the finished tub. 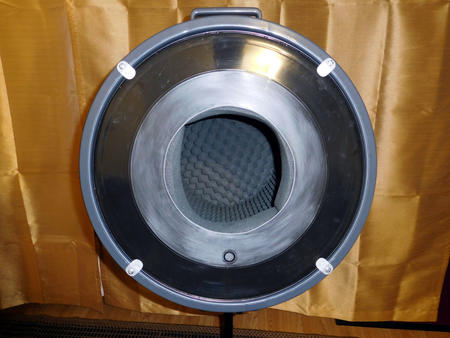 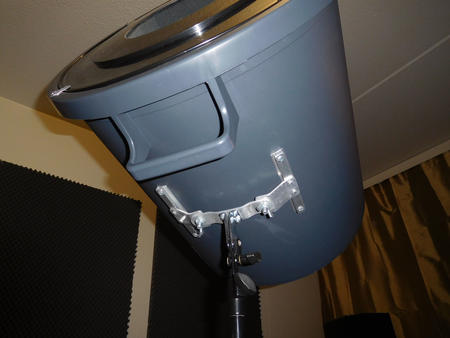 Of my six requirements listed in the beginning, numbers 4-6 are taken care of gracefully. As for the third one, the playing feel, it totally rocks. It feels pretty much as playing completely open, and the sound isn't bad at all, either.

And now for the most interesting part: does it keep my ears tinnitus free and does it keep the neighbours at bay? Yes, it does. I tested the thing by playing in a small bathroom without any trouble. It's hard to capture the effect on video as my camera auto-adjusts its mic gain, so try to assess the sound levels from the background music from the following video. Judging purely from the waveform peaks, I saw a good 12 dB attenuation at times. In reality the effect is more than just a lower absolute volume.

That last bit I just had to try: I can just fit my head inside the tub and scream my lungs out. I actually showed this at my workplace briefly, perhaps I should start selling these as stress relievers for non-musicians, too? 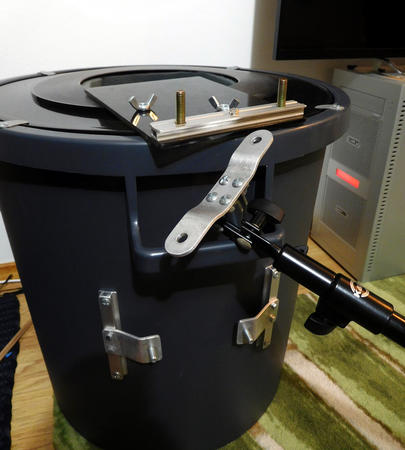 So I replaced the original note stand piece with an adapter piece. I call it an adapter because not only I can attach the tub to it, I also made a back plate for a tablet or an e-book reader, using the same adapter piece to attach the stand. The plate is made of poly(methyl methacrylate), or acrylic glass, originally a note stand for an electronic organ - again something I just had lying around. In the pictures I have a Kobo Glo HD e-book reader showing some notes, and a size comparison to an A4-sized binder. I sized the plate so that it will nicely cover an iPad for example. 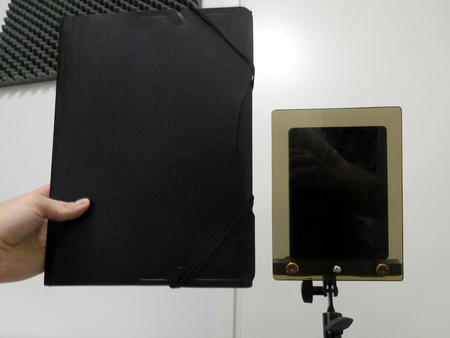 I can switch between the acoustic tub and the e-book reader stand in a minute, and should I ever need to, I can still actually put the original note stand back again by replacing the adapter. This saves me quite a lot of space as I only need a single stand for all three purposes.

A reader asked for more specific decibel measurements. I recorded a piece from Joseph Guy Ropartz's Andante et Allegro. I played the part two times, with and without the acoustic tub. I recorded both times with an AKG clip-on mic I use on gigs for reference, and a laptop mic about 3 meters away for the actual measurement.

I first attached the clip-on mic to my mobile phone, and recorded some music from the phone. I made this two times, outside and inside the acoustic tub. This was just to make sure the decibel levels are approximately the same from the clip-on mic. These reference measurements were within 0.11 dB from each other. I did all the decibel measurements by scanning the recordings with a ReplayGain scanner, which gave me the perceived loudness against a reference 89 dB level.

I found out I was playing much, much louder into the tub than my ears could handle without the tub. The reference recording from my clip-on mic was clipped to saturation. So I gave it another shot. This time I ended up pretty near the volume level from the recording without the tub. The small difference I had (it was within 0.60 dB) I compensated in the laptop mic recording by amplifying accordingly. Looking at the waveform, it looks like there's some differences between the two recordings from the clip-on mic, but in reality they sound really similar.

The measured results are, in ReplayGain values:

This means a whopping 15.59 dB difference in perceived sound pressure level at 3 meters, making the acoustic tub similar in attenuation to wearing high-quality custom-made earplugs, such as the Elacin ER15. I added the recorded clips as Ogg Vorbis files here if you want to check them out: