...with a bit of modding too, of course

So I wanted to have new earphones I could use when walking or doing sports. I'm really sensitive to the effect noise isolating earphones create. I don't like hearing my own breathing, let alone my heartbeats. The worst are my footsteps - they sound like a bass drum. I do own an adequate pair of sound isolating earphones, namely the Shure SE215 LTD, but for the aforementioned reasons I just couldn't use them except when being still. They are nice for office work, though, as they isolate pretty well.

Another thing I have to take into account is that I wear eyeglasses. Therefore earphones that wrap around your ears and regular headphones, which stay in place by squeezing against your ears, were pretty much out of the question. In short, I was looking for earphones I wouldn't even feel were there. I had that effect sometimes back in the day with the Sennheiser MX 90 VC, but quite often their sound quality and wires left a lot to desire.

Then I bumped into the Sony SBH70. They are open earphones that promise a good sound quality and bass, which is rare for a non-isolating design, while using a necklace design for the main unit, thus making the earpieces very light.

Connecting the SBH70 for the first time was easy: just turn on the power, pair using another device and you're done. To connect to additional devices, you have to press the power button a bit longer to go into pairing mode, which the quick start manual forgets to mention. I've used the earphones with Xubuntu 16.04 on an Asus and Dell laptops, and on my Android 4.4.4 phone. All of them have worked more or less nicely, but there are some things to pay attention to.

First of all, if you're thinking of doing VoIP phone calls with these earphones, don't. It's not that they wouldn't work as well as any other bluetooth device for phone calls. They are fine for a bluetooth headset. It's just that I realized only after trial and error that you can't use the microphone when using the better quality A2DP bluetooth profile, and when using the regular HSP/HFP headset profile the sound quality is simply horrible. You're better of using your laptop's integrated microphone with the SBH70 just as an output device. Another problem is the unreliability of using bluetooth earphones with Android. Even though I have a quad-core phone with pretty much nothing running in the background, sometimes the sound is cutting really badly, and you can forget about multitasking. I've read this is a common problem among Android phones, even high-end models - but your mileage may vary.

Battery life seems decent enough for everyday use. I haven't done any real measurements, but I'd say you get a few hours of use with one hour of charging. You can also charge the earphones while using them, which comes handy in an office as otherwise they wouldn't make it through a day's work.

The earpieces are indeed light and you hardly notice them in your ears, which leads me to the first of their two biggest problems: they might not always stay in your ears. Because the wires point forwards and not upwards from the necklace, they are longer than would be necessary if they were pointing towards the ears. The long wires get tangled easily with something such as a collar of a jacket. Throw in a turn of the head and an earpiece falls off your ear. Another situation where I constantly had this problem was when doing sports. If I laid down on my back (when doing bench press for example), the earphones would slip off the ears almost every time. Also the necklace would fall off quite often.

The other big problem is their durability, or lack of it. I had the earphones only for about six weeks when I noticed a weird crack on one of the earpieces. I have no idea where a crack like that might come from unless it was a material defect in the first place. As seems to be the tradition of Sony products having no warranty, the retailer told me this would not be covered either. I decided to just superglue the crack and hope it won't break any more or leak any water inside.

The wires are super thin, and there's almost no strain relief on them. Compared to my Shure SE215 LTD the difference is quite striking. You could drive a tank over the Shure earphones and they'd still be working, whereas with the Sony you have to be careful all the time not to break the wires accidentally, at least that's how they feel.

Finally there's the most important thing, the sound quality. It actually surprised me very positively. Obviously it's not exactly high-fidelity, but I've never witnessed such full sound, including bass, from open earphones. Wearing these while walking is a joy. You hardly feel them in your ears, you still hear most of the sounds around you, but the music is still there in its full glory. I've listened to the earphones in an office, sometimes a few hours straight, and haven't felt like I'd be missing something critical or getting any fatigue. That tells me something about the sound quality: it's adequate to say the least. 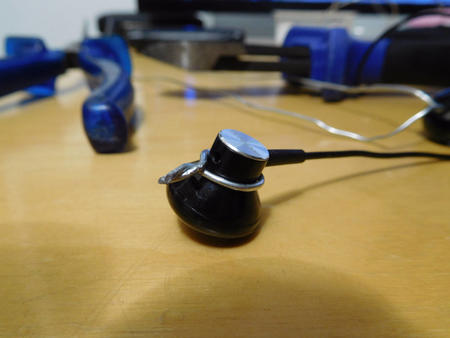 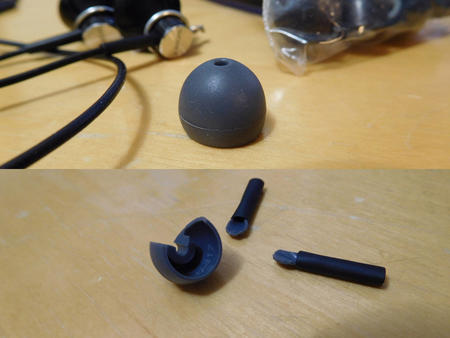 I got bored of the phones falling off my ears, so I made some custom wingtips. They are popular among bluetooth earphones, and would have liked them as an extra accessory here also. I took some metal wire and bent it over the earpieces. The earpieces have small holes which act as some kind of reflex ports and therefore must not be covered. I had a bunch of leftover rubber tips lying around from my Shure earphones, so I cut some pieces from one of them and put everything together with heat-shrink tubing. The end result is actually not that bad - I can hardly feel any difference, but for example now I can put on a shirt while wearing the Sony, which wasn't possible before without the earpieces falling off. 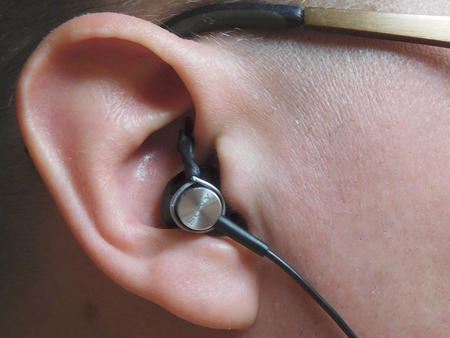 The Sony SBH70 proves it is possible to achieve good sound quality and bass reproduction even with an open design. It also reminds us that looks over function is quite often a bad thing. Recommended for use during certain fitness activities such as walking.