I had this feeling my old bed was starting to resemble a biological weapon, so I decided to ditch the so called crack mattress. Already for years I'd wanted to build a bed and it had been a long time since my last woodworking project, the acoustic panels, so it was about time the woodchuck chucked some wood. Every now and then I just need to create something with my hands, hence it was a welcome project also for my mental health. The end result image gallery is at the bottom.

The materials and plans

After studying different materials for a while I decided to use aspen for the bed. For hardness and hopefully straighter slats I opted for a thermally treated variety, but decided to also use some naturally light-colored, untreated wood for the support beams.

So what's this Japanese style I mentioned in the title? To me it means this feeling of simplicity, fine craftmanship and certain naturality. For example, joints without nails or screws. It just wouldn't feel zen if there were some machined metal pieces sticking out.

I came up with the design myself and drew it onto a paper while on a train to the garage I was using to build the bed, although I had been thinking about different designs in my head for a while already. Figuring out the stands was surprisingly difficult. I also came up with some sort of headboard.

Despite the zen goals, because of restricted tools, workspace and time, I opted not to go for a true purist approach, but instead decided to use glue for some of the pieces and attach the headboard using bolts. I figured as long as nothing really sticks out, it's good enough.

I also considered the amount of material needed. Eventually I bought 200€ worth of wood and 50€ worth of oils and other materials. The thermally pretreated wood was sold in lengths of 1500mm, 1800mm, 2100mm and 2400mm. I picked the least wasteful lengths available. The non-treated wood was a four-pack of 2100mm boards. I would cut those in half as I decided to use a hidden hinge for easier transportation.

Making the support beams and slats

The main tool was an old circular saw built by my father when he was young. Working surfaces were quite rough, but with precise planning and using brains I managed to create most notches and lengths accurate to within 0.1mm. Difficulties were caused by some of the slats being quite crooked and the measurements not being exactly accurate: for example, the support beams that were supposed to be 90mm wide were in reality more like 87mm. Similarly, the slats were supposed to be 28mm wide, but were closer to 27mm. The circular saw width was 2.7mm. Sawing the notches thus required around ten cuts per notch. In total I think I did almost 700 runs with the circular saw for the notches. 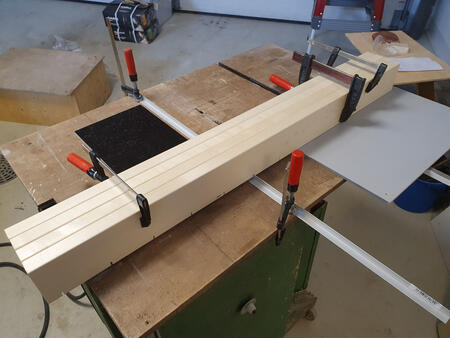 I wanted to make the legs have both colors of the wood. They are not connected to the support beams in any way. There are six legs in total: only the middle legs cannot move as the hinge would prevent it. This works also as a safety feature so the support beams never collapse accidentally. The support beam middle split is not visible outside as the leg covers it.

First I thought about using nuts and bolts to hold the headboard in place, but I found some very sturdy screwed inserts that were perfect for the job. I kind of like the idea of being able to extend my arm over the bed, so I knew the headboard was just going to be a couple of slats. How those would be attached was another thing, and I went for rectangular holes through which a slat would go and lock on to its notches. The headboard slats are thus exactly like those underneath the mattress and interchangeable. I just picked the most beautiful ones for the headboard. Making a lot of rectangular holes in a thick wood without special tools is something I would not recommend doing, unless you wish to explore your masochistic tendencies.

Before oiling everything, some sanding was required. It took a surprisingly long time. Not sure if the thermally pretreated wood was really much harder to sand, but it felt like it was. It would make sense though, as it should be a bit harder.

I found an old Johnson Pled finishing oil that was meant for dark wood. Surprisingly it didn't darken even a light wood that much, so I ended up using it for the first layer for the non-treated lighter wood. The Liberon finishing oil consists of multiple oils such as China wood oil. It darkens the wood a bit but worked well for the thermally treated slats. I applied two layers with a brush and a third layer to some specific spots using a rag.

Some people warn about the oils having a smell to them. I agree. It even seemed to last for some weeks. What I didn't expect was how nice the scent was! It was almost like aromatherapy applying the oils and during the first few weeks in my bedroom.

In total, building the bed - planning, getting the materials, working on it, finishing everything - took me easily over 80 hours. With better tools and everything a lot of that time could be cut, but then again, if not using hand tools at all the project would start to lose one of its purposes. Additionally, now I have experience using circular saw to do all kinds of things, and learning about wood oils was fun. It's worth investing in high-quality materials: having crooked slats makes everything more difficult and might be visible in the end result.

Getting the right mattress turned out to be a surprising challenge, however. In the past two months I've had a total of nine different mattresses or toppers and I've tried out different combinations of them. It would be really nice if the mattresses had some quantitative specifications. One model in firm variety might be too soft compared to some other model. I ended up using a firm IKEA Malvik mattress as a base. On top of that there's 8cm of Formax memory foam with a density of approximately 50kg/m³ - it's of slight B grade, the more expensive prime stuff is 65kg/m³. Finally, on top of the memory foam is a 4cm thick 100% natural latex topper with Tencel covers. Summer was super hot in Finland, so the latex topper has been very useful in keeping me cooler.

Even if some of the details are hidden from sight, just knowing they exist soothes the mind. For example, the support beam reflections from the slats are hidden by the mattress, but knowing they are there brings me the zen vibes just thinking about it. Except for attaching the headboard, assembling the bed is toolless.