Taipei is one of the most amazing cities in the world

After visiting Shanghai, Hong Kong and Macau, I didn't know anymore what to expect when I landed on Taiwan. Taipei City was pretty much fully booked for the New Year's Eve, so for that day I had originally booked myself an accommodation from Hualien from Taiwan's east coast. I was planning on spending the first couple of nights in Taipei, then go to Hualien and check out Taroko National Park, then come back to Taipei.

Right from the start Taiwan felt like an easy place to visit. I bought a cheap bus ticket from the airport and hopped on. The bus took me near the central railway station in Taipei, only short walk away from my capsule hotel, Inn Cube Minquan. Except for the thin mattress it was a good place to spend a few nights. I had only spent one night in a capsule hotel before, and that was in Japan. I really do like the concept, though, and wish it would come to Europe also.

In general, spending time in Taipei was really easy. The city center was clean, felt safe and was full of places to eat, yet it didn't feel too crowded. Public transport worked like a charm and wasn't expensive at all. 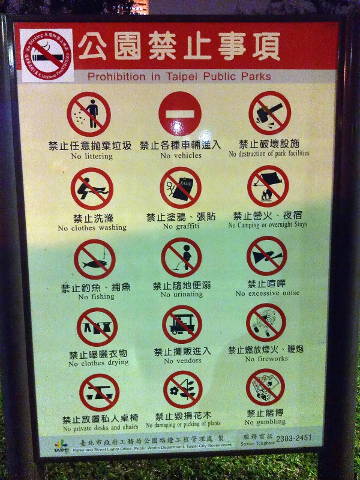 I spent some time strolling the museums and city in general and visited the famous Moon Bridge in Dahu Park. It was actually quite funny after having seen the famous photoshopped pictures of the bridge in the so called morning mist. The park was nice though, and the bridge was kind of cute. The night markets were ludicrously huge and everyone seemed to have a good time - so much it actually started to feel a bit disturbing at times, which was weird. Also, funny how at least one thing felt like home: I haven't seen so many prohibition signs at once even in Finland! 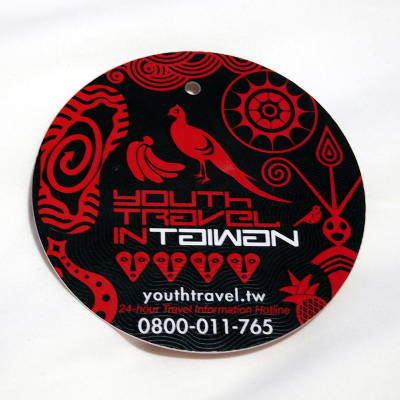 If you're under thirty, it's worth getting the Taiwan Youth Travel card from the main station. It's free and gives you discounts to certain trains and some activities. I went to see Peking opera in TaipeiEYE for a reduced price. The show was definitely worth checking out.

There was a cancellation, so I managed to get myself an inexpensive stay in Taipei for the New Year's Eve. I went to the Elephant Mountain hiking trail to check out the fireworks of TAIPEI 101. It was a pretty unique sight to see a 500-meter-tall building shoot stuff all around, but I think I prefer traditional firework displays, even smaller ones. The interesting part was again the people. Everyone was so friendly and easy to approach, yet after the display I was kind of expecting people to keep on celebrating. That wasn't the case, everyone pretty much just went straight to their homes to sleep. On the streets, nobody was drinking or cheering or anything, bringing me the same weird feeling as at the night market.

Hualien felt a bit more Chinese than Taipei, although it was still a nice little place to visit. By Chinese I mean not that sophisticated, clean, and organized - there still was a warm Taiwanese feel to it. Probably most people visit Hualien for its location near the Taroko National Park. Turns out if you're going to visit Taroko, you probably need permission for most of the cool stuff, unless you feel like going vigilante. For example, crossing the famous rope bridges needs a permission, and getting one may take a couple of days. That if anything felt Taiwanese after all the prohibition signs in Taipei. However, even if it was raining and I only had a few hours to hang around, there seemed to be plenty to see. 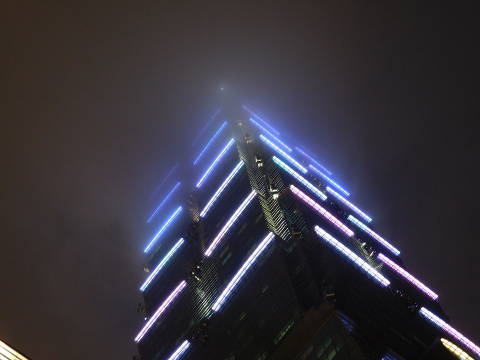 One of the highest buildings in the world, TAIPEI 101 was a nice visit. For some reason, I always wanted to see the tuned mass damper on the top, so up I went. The mass damper didn't disappoint, it was on display pretty prominently, and it did look like a piece of art even if it's a functional thing. On a clear day the views are probably pretty nice, too. It was a bit foggy when I went there, but still the surrounding hills were visible. I took the attached photo one evening when the building looked like Emperor Palpatine ordered it built.

A bit north from Taipei, there's a national park with lots of smaller peaks. One can take a metro to Xinbeitou, and from there a bus to the national park. I think the bus cost something like NT$ 15, whereas some buses cost NT$ 30, both which are cheap. I paid with a NT$ 50 coin, but turned out no change is provided. 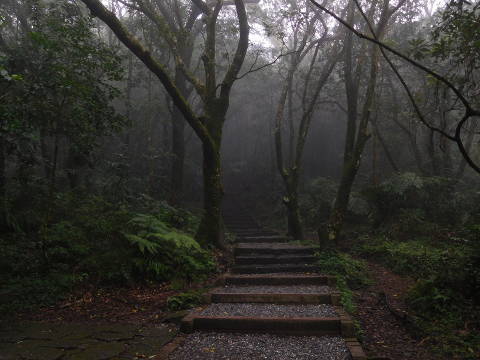 I climbed the Mt. Cising (Qixing) main peak (1120 meters) and walked down across a volcanic area. I took the Lengshuikeng-Qingtiangang pedestrian trail, walking across Jingshan suspension bridge. It had rained a bit, and everything felt so serene, hardly any people anywhere. 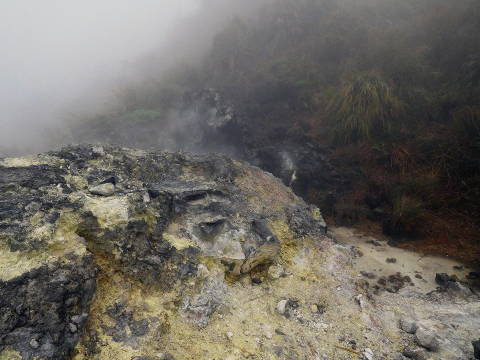 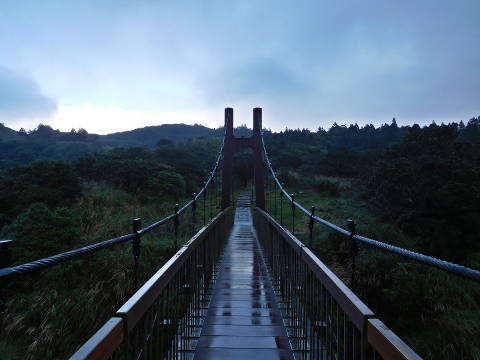 I ended the day by going to a public thermal bath in Xinbeitou, and took the metro back to the capsule hotel. This is when I realized how awesome Taipei actually is when it comes to nature: you have volcanic stuff, nice hills, waterfalls and everything, even thermal baths, all within the reach of rapid public transport. 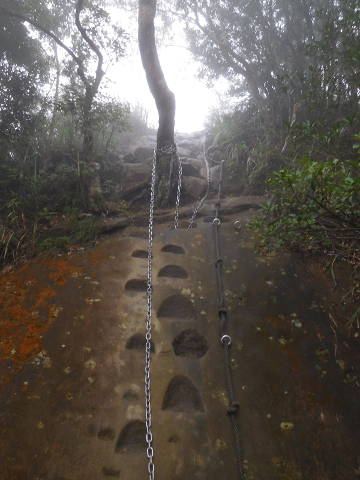 The next day I took the metro to Muzha MRT, and from there the ominous bus number 666 to Shiding. The hiking trail starts very near the town. As the day before, I bumped into only a couple of people in the beginning of the hike, then I was all alone for the next few hours hiking in the jungle. The day was foggy, so there wasn't really any views, but the trail was so much fun. You have all kinds of chains, ropes and ladders to climb. After the hike, walking towards the bus stop everything felt abandoned, it was like The Lost World. An hour later I was back in Taipei City walking along neon lights between skyscrapers. Again, the diversity of Taipei amazed me. 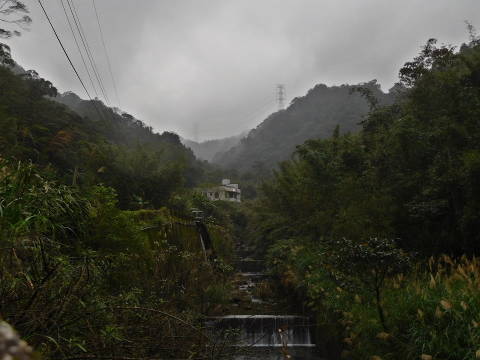 I'm kind of a musician, so I pay much attention to music played in a culture. After being forced to listen to dozens of versions of All I Want For Christmas Is You in Shanghai, hearing elevator-style classical music all over Taipei felt like a nice change. Soon it started to bother me, though. I wonder what's up with the music in the place? Basically 90% of music I heard were some kind of MIDI renditions of classical music. The only street musician I heard was playing Radetzky March over MIDI backgrounds, in Taipei Expo Park.

When I visited Shilin Night Market I was amazed to see how happy and innocent people seemed to be there. Everyone was playing silly games and eating all kinds of funny foods. For example, in one type of game you tried to pop air balloons with darts. It was all nice and lovely, but there were basically dozens and dozens of those silly games, and at some point I got this surreal feeling. A friend of mine described it like this: "it's like a giant playground, and then you realize people are actually living there". It might be that I'm too used to the Finnish culture where you have at least someone yelling loudly, behaving inappropriately (usually drunk) or something similar, but the Taiwanese silly happiness did feel just a bit weird.

The same was kind of visible when checking out the fireworks display in New Year's Eve. When I used a tripod to set my camera against a tree and a lighting pole, people were praising my ingenuity. It was fun and all, but really, since when is using a tripod ingenious? People did seem genuinely nice, though, so even if things felt weird at times, it was a fun ride.

Whether you are searching for hikes in the nature, the best chocolate cake in the world, crazy night markets, hot baths, or nice people, you will probably find them in Taipei. It is a super easy place to visit, so it doesn't matter whether you are a hardened traveler or going on your first vacation.