Checking out four islands in Indonesia

After my short visit to Cambodia in early 2016, I wanted to go to Australia. Indonesia was along the way, so why not stop there for a while. And so I flew to Kuta, Bali. It was supposedly the rainy season, but it wasn't actually that bad overall. Maybe I got lucky.

Bali was my first visit, as the international airport is there. I arrived in the night and was immediately greeted by a horde of super-annoying cab drivers. They did leave me alone eventually when I just ignored them completely. After a night in a cozy guesthouse in a really shady looking alley, I walked to Kuta.

My first impressions of the place were: if there is a tourist hell on Earth, being a white person and walking the streets of Kuta must be it. It was unlike anything I had or have since encountered anywhere else. I couldn't walk one meter on the streets without at least a couple of people yelling me "Yes!" or "Transport?" At first it was a new experience, but it got old really quickly, after which it annoyed the hell out of me, and eventually I learned to ignore everyone completely. This kind of stuff gives tourists a bad reputation, but the locals clearly have zero idea how they should handle them. The prices in most places are ludicrously high in Kuta. There are a few nice and affordable places though, you just have to find them.

Kuta Bali is famous as the place where it's easy to try out surfing, so I too tried it. There are no rocks or anything and the water is shallow, yet there are nice waves to try things out. Just go and walk along the beach and you'll find locals to teach you the basics for pretty cheap. My teacher went by the name Q, or that's how his name was pronounced at least. Strange things happen on the beach also. I was wearing pink swimming trunks and got myself a fan crowd to cheer up the pink guy. Some even took selfies with me. Go and figure.

Another first for me ever was a really bad hostel in Bali. Just check out beforehand they haven't crammed twenty people in a room fit for six and you're probably off to a good start. I stayed in Kuta for two nights, but one would have been enough.

A surfer friend of mine had told fancy things about the Nusa Lembongan island, and since I was heading to the Gilis I decided to stop by for a couple of nights. A funny thing happened in Bali when I was searching for a "bus station", which supposedly was somewhere near. After asking around, by bisecting I eventually found myself standing right next to it. Eventually there was a bus, which cost pretty much nothing and got me to the harbor. I managed to haggle a nice price for the boat - there's a lot of leeway in the prices for tourists.

Nusa Lembongan itself turned out to be a paradise for serious surfers and yogists. For me, it was interesting for a day, but a bit boring for the second. It's a small place with few things to do. Luckily I met this very nice Swedish girl and had interesting conversations. It's always funny to meet a neighbour or a fellow countryman in a very remote place. 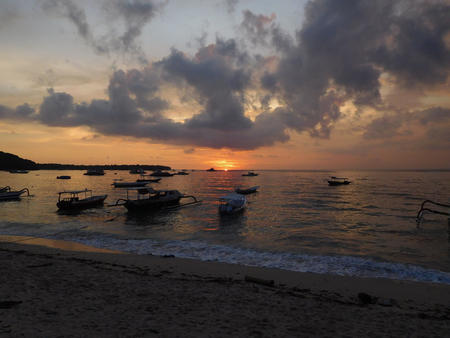 After the yoga paradise it was time for the party paradise, or that's how some people apparently see Gili Trawangan. There were parties going on, but you could easily miss or skip all of it by walking away a few blocks. For that reason I totally recommend the Gilis, as they offer variety. I tried snorkling for the first time ever, and rented a fatbike which I rode around Gili Trawangan on the beach sand. I was a bit surprised to see so many Finnish people there. Maybe the place is just a complete opposite to Finland and therefore draws interest. A couple of nights went by very quickly at the Gilis.

Lombok is probably best known for the Rinnaji volcano. If you are lucky and conditions allow it, you can hike to the crater lake with a guide. A friend of mine did it and the photos he showed me were nothing short of breath taking.

I wasn't so lucky with the weather conditions, and I wasn't going to stay for more than a couple of nights anyway, so I opted to go to the Tanjung Aan beach, as some travelers had told me it's beautiful. I figured it doesn't have that much of sunset views so I decided to try out a sunrise for a change. Riding a bicycle along an unknown, pitch black road with barking dogs right at your heels was probably the most scary thing I did on my trip. I had also heard from several sources people getting robbed there every now and then, and someone had lost an arm a month ago in a mugging.

But all of this just contributed to the amazing feeling when I finally arrived at the shore. Fishermen had already started to dig up something on the beach as the sun was about to rise. I don't think I've ever seen such a powerful scenery as standing there on the cliffs, watching the sun rise and the ocean waves starting to hit the rocks. 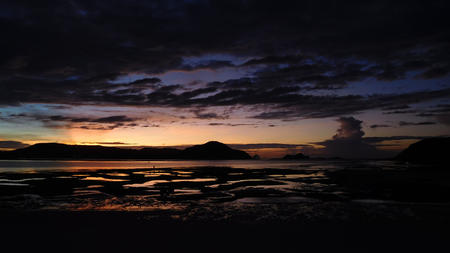 Even without a hike to Rinnaji, Lombok delivered. If you are to see the komodo dragons to the east, there are also cruises leaving from Lombok. To ensure it was an unforgettable experience, I got a food poisoning just as I was about to leave the island and threw up for the first time in eighteen years or so. But man was it worth it.